Tales from the Chihuahuan Desert: A Summer Institute

About the Region
Syllabus
Travel & Stipend

Located in one of the largest binational communities in the world, The University of Texas at El Paso (UTEP) is unique among research institutions.

The University of Texas at El Paso is one of the largest and most successful Hispanic-serving institutions in the country, with a student body that is over 80% Hispanic. It enrolls nearly 25,000 students in 166 bachelor’s, master’s and doctoral programs in 10 colleges and schools. With more than $100 million in total annual research expenditures, UTEP is ranked in the top 5% of research institutions nationally and fifth in Texas for federal research expenditures at public universities.

UTEP has been recognized by Washington Monthly magazine for a third consecutive year among Stanford, Harvard and the University of California, Berkeley as one of the top 10 universities in the nation. The magazine recognized UTEP for its strong impact on the students served, cutting edge research and success in encouraging students to give back to their communities. For improving the future prospects of its student population, the magazine ranked UTEP #1 among all U.S. colleges and universities for the fourth consecutive year in the subcategory of social mobility.

With more than $90 million in annual research spending, UTEP is the first national research university serving a 21st century student demographic – a designation that boosts the region’s economy and quality of life, while offering a wealth of research opportunities for undergraduate and graduate students.

El Paso is located at the western tip of Texas, where Texas, New Mexico and Old Mexico meet. It is the largest international metroplex in the world and seamlessly blends cultures and traditions: from the historic Old West to the colors of Mexico, from the heritage of Native Americans to the beauty of our desert sun. El Paso has long been discovered. Since the early days when Spanish Conquistadors arrived at the banks of the Rio Grande in 1598, to today, with the millions of visitors who come here on a yearly basis. 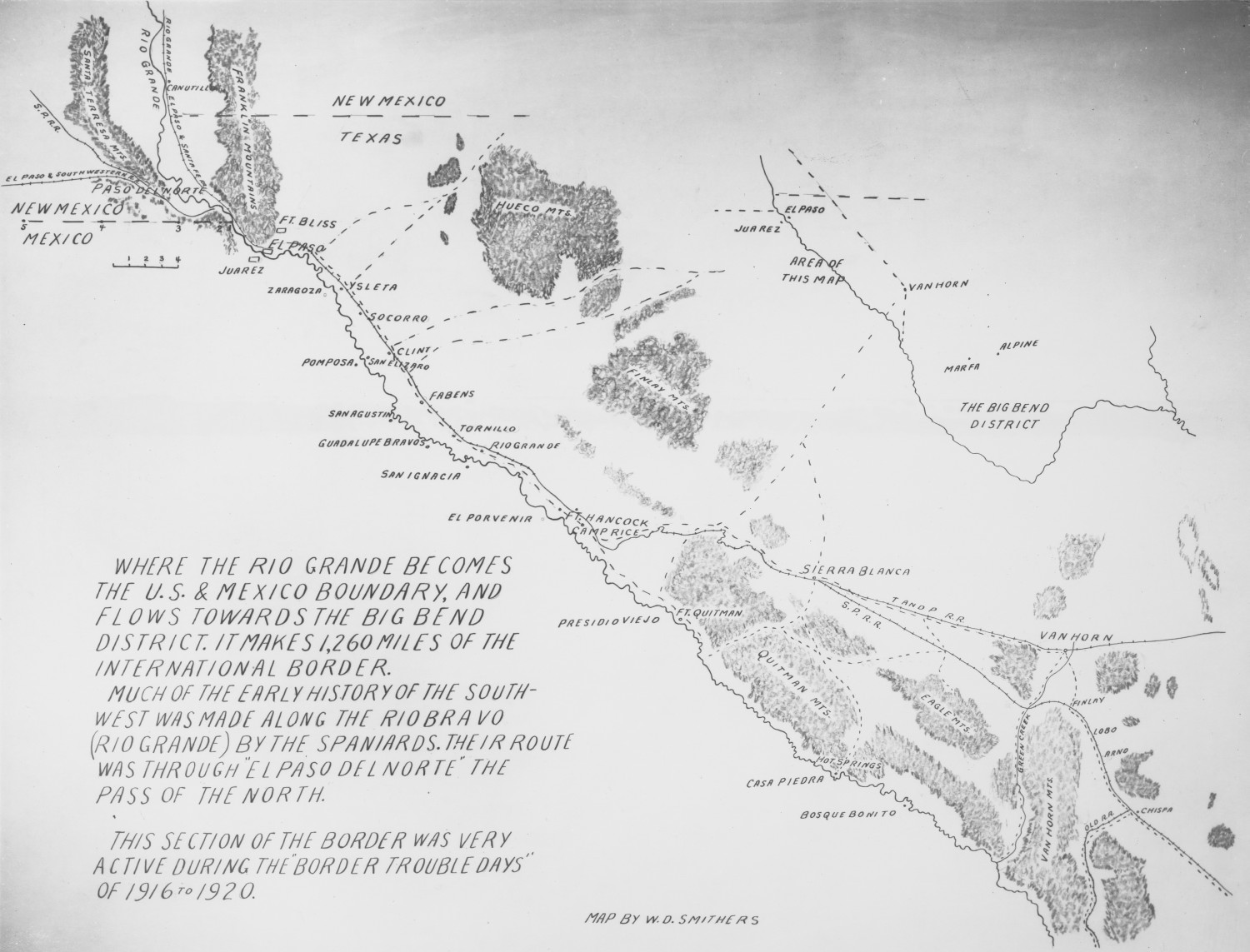 Map of the U.S.–México Border from El Paso to Van Horn, Texas, 1920 by W. D. (Wilfred Dudley) Smithers, 1895–1981
Reproduction of a hand-drawn map [1920] showing the border area between Texas and Mexico from El Paso, Texas (left) to Van Horn, Texas (right).
Several towns, forts, roads, and geographic features are marked primarily on the Texas side of the map.

A note in the bottom-left corner of the map says: “Where the Rio Grande becomes the U.S. & Mexico boundary, and flows towards the Big Bend District.” It makes 1,260 miles of the international border. Much of the early history of the Southwest was made along the Río Bravo (Río Grande) by the Spaniards. Their route was through “El Paso del Norte,” the Pass of the North. This section of the border was very active during the “Border Trouble Days” of 1916 to 1920.

For more information on the source, visit HERE.