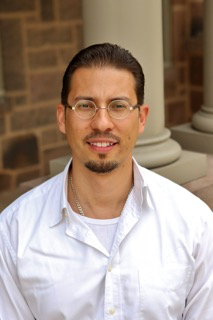 Ignacio Martínez is Assistant Professor of History specializing in the history of colonial Latin America. He received his B.A. and M.A. degrees from the University of New Mexico, and in 2013 he earned his Ph.D. from the University of Arizona. Ignacio’s research and scholarly interests include the Atlantic World, the social and intellectual history of colonial Mexico, the Spanish Borderlands, and the history of emotions.

Ignacio’s book manuscript, tentatively titled The Intimate Frontier: Friendship and the Social Origins of Civil Society in Northern New Spain looks at the role of friendship in the social and intellectual construction of frontier society and is currently under contract with the University of Arizona Press. His second book project, which is currently in its initial planning stages, takes a broader methodological approach in analyzing how ideas about friendship matured and circulated throughout the Atlantic World. Ignacio is also in the process of writing a series of articles that address such themes as pain and loneliness on the Spanish frontier and the use and abuse of lies and deception as instruments of power.

Ignacio was born and raised in Roswell, New Mexico, to Mexican parents from Durango, México. His interest in colonial Latin America was awakened while in college amid a personal quest to better understand his own history and identity. As a scholar, he is devoted to helping students achieve success in their professional lives and is always willing to spend time with students who are engaged in their own personal journeys for identity.

Ignacio is deeply devoted to his craft as a historian. However, when he succeeds in finding time to get out of the office, he enjoys working out, playing racquetball, and spending time with his family.

R. Joseph Rodríguez is an independent scholar. He has taught English and Spanish language arts in public schools, community colleges, and universities. His areas of research include children’s and young adult literatures, language acquisition, and socially responsible biliteracies.

Joseph is the author of Teaching Culturally Sustaining Young Adult Literature: Critical Perspectives and Conversations (Routledge, 2019). Some authors included are Jeff Anderson, Matt de la Peña, Guadalupe Garcia McCall, and Erika L. Sánchez. Also, he is the author of Enacting Adolescent Literacies across Communities: Latino/a Scribes and Their Rites (Lexington Books, 2016) and has published in various academic journals. He is completing a research book reading and study of children’s literature and teachers as writers who also compose with their students.

A graduate of public schools in Houston, Texas, Joseph grew up in a bilingual and bicultural home and pursued studies in literary criticism and literacy education. He earned degrees from Kenyon College (B.A., Modern Languages and Literatures, 1997), University of Texas at Austin (M.A., English, 1999), and University of Connecticut (Ph.D., Curriculum and Instruction, 2001).

An active member of the National Council of Teachers of English (NCTE), Joseph supports professional learning and exchanges across the country to advance student learning and the teaching profession. He serves as coeditor of English Journal, a peer-reviewed journal of NCTE that has been published since 1912. It features columns and articles on all aspects of the teaching of English language arts and literacy learning at middle schools and junior and senior high schools.

Joseph is motivated by the art of teaching and learning. He is a reader of diverse U.S., borderlands, and world literatures. When he is not reading, teaching, or writing, Joseph enjoys cooking, hiking, kayaking, storytelling, and traveling with the love of his life and their cantankerous canines.