Daniel Jaramillo is a native of El Paso, Texas. After moving to Austin in 2012 to study history, he got a teaching position at Del Valle High School. He currently teaches U.S. government to seniors, and has previously taught World History and Economics. Daniel is the Assistant Tennis Coach at Del Valle High School. He enjoys reading non-fiction, hanging with friends, creating, producing, and playing music. Daniel plans to learn about binationalism and identities in the Summer Institute and gain a better understanding about the issues and obstacles communities face. He seeks a greater understanding about who his students are and their identities.

The United States is often referred to as “A Nation Built by Immigrants”. In fact, the United States has a love/hate relationship with immigrants, dependent on the narrative trying to be expressed. History books tell stories of immigrants coming to this land in search of a better life, and even engrave on our monuments, words of affirmation for immigrant communities. The statue of liberty as an example states “Give us your tired, your poor, Your huddled masses yearning to breathe free…” While the United States likes to romanticize and exaggerate itself as an inclusive and accepting society, the current and past government administrations offer a counter narrative. A narrative driven by hate and a law and order mentality, that does not pay attention to the circumstances, or push and pull factors that bring these immigrants to the United States.

In the album No Otro Lado, Marissa Johnson-Valenzuela, through music and poetry, explores the struggle of immigrants trying to assimilate in a country that constantly oppresses them. A country that has tried to keep them out with a border wall and border security policies, justified out of fear and hatred.

Almost everyone in United States is living here because someone in their family immigrated at one point or another. As generations pass they often times forget that their family came to this country in search of a better life, or to escape some form of oppression.

Students in the United States are dealing with an internal conflict of having to understand government policies that claim to be in place for protection, and their sense of compassion and empathy for humanity.

Common Core State Standards, English Language Arts, Literacy.RH.9-10.4 Determine the meaning of words and phrases as they are used in a text, including vocabulary describing political, social, or economic aspects of history/social science.

Common Core State Standards, English Language Arts, Literacy.RH.9-10.8 Assess the extent to which the reasoning and evidence in a text support the author's claims. 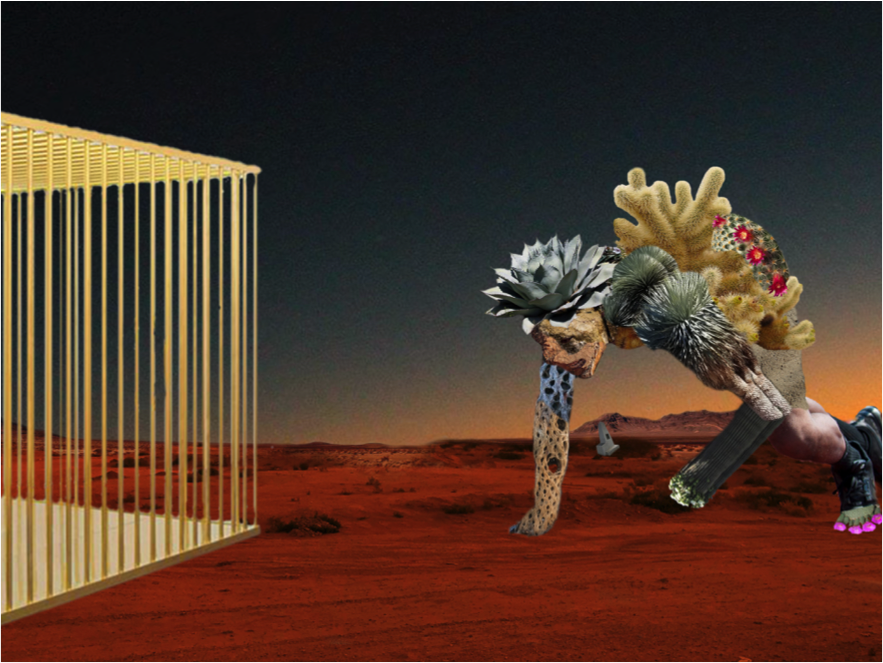 Journey to the Golden Cage (2019) by Daniel Jaramillo.
Multimedia art created with photoshop.

The image above is titled Journey to the Golden Cage it conveys the journey of an immigrant through the desert, traveling to the United States.

Have students to write in their journals. Let students share their responses with a partner, then have them share as a class.

The immigrant has endured and struggled so much that the journey has changed who they are on a physical level. The desert has overcome them. The outcome, of a better life, is seen as a golden cage (United States), luxuriousand fruitful, but confining. Once immigrants are in the United States, they will most likely not be able to return to their home, they have to assimilate and form a new identity that is in constant conflict with their former self.

The teacher will share a google document with the students that has the lyrics to all three songs. As a class, we will analyze the first three listed songs from the album “No Otro Lado” by Marissa Johnson-Valenzuela and answer the guiding questions. The idea is to teach students how to annotate and analyze songs lyrics. After listening to each song, go through and annotate the lyrics with them. The teacher will use the figurative language guide to help students learn and analyze figurative language within the lyrics. You do not have to show them the questions below, pose them as part of a discussion. You can change, add or exclude questions.

***Warning: The song Herencia depicts and recounts cases of mob violence, prep students so they understand how to process this information in a safe and respectful manner, for themselves and others. You can also choose to skip this song and use “Other Riches” instead.

The three songs will be:

Have a few students share their half page summaries from the day before. You can do this by allowing students to volunteer or pick up the responses and read them aloud to the class. Keep students anonymous, only read the content, do not let them know who wrote it.

Ask students to write in their journal by answering the following as a warm-up:

This will be a guided project, where students should be given two days in class to complete. Students will work individually to find other narratives of immigrants who have come to the United States. The goal is to find songs that focus on the topic of immigration, assimilation, binationalism, or identity.

Students will use youtube to research songs that focus on immigration. Lyrics to songs might be in other languages, have google translate to help students understand lyrics.

Students will need to:

As a pre or post assignment, you can cover current United States policy decisions and their effect on immigrant communities. You can relate them back to the four songs covered above.

Students will be asked to write a half to full page response to one of the three songs analyzed as a class. Students should be using their figurative language guide to help them with their summary. They should reference figurative language in their writing from the lyrics.

They should focus on their annotations and the guiding questions for each song, it is important they are documenting either in their journal or computer what the class is discussing to use for their assessment.

They can write about how the song made them feel, what the song is discussing, and what they personally learned from the song, have them reference the actual sounds of the music as well.

Students should be able to understand the perspective of immigrants living in the United States, the transformation they go through, and the way the United States treats immigrants. They must understand how immigrant communities assimilate and are often times conflicted in their own binational identity.

After students have finished their playlist with their one page summary, they will be asked to present with the class, the song that they chosen, the image that represents the song, and their one page summary. You can have students do their presentations as a gallery walk with their devices. Have their song opened and ready to be played with headphones, and a digital or printed copy of their summary.

*You can have students go one by one in front of the class, they can play all or a snippet of their song. They will share their image, and read their summary aloud to the class.

Teacher should create a rubric to give to students to guide them through he process.

Some accommodations and modifications to consider are as follows:

The following resources support teaching and learning about the borderlands and identity:

Erika L. Sanchez. “I Am Not Your Perfect Mexican Daughter.” PenguinRandomHouse, 2017.

Luiselli, Valeria. “Tell Me How it Ends: An Essay in Forty Questions.” Coffee House Press, 2017.

Morales, Miguel M. “This is a Migrant Poem.” In Green Mountains Review,

When creating this lesson, I really wanted to focus on music and poetry. The album “No Otro Lado” is a great musical example and exploration on the topics of immigration, binationalism, identity, and assimilation. The music also gives the student a sonic way to learn and understand the message behind the concept. I believe it is important to employ all types of media within the classroom.